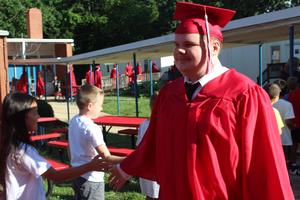 Union Academy Class of 2018 Valedictorian Taylor Ross was a model student during his time in high school.

Union Academy Class of 2018 Valedictorian Taylor Ross was a model student during his time in high school.


One of Ross’ biggest involvements was with Boy Scouts, which he joined when he was in first grade. This year, he completed the rank of Eagle Scout -  the highest youth award in Boy Scouts of America. Ross had to complete a community service project to reach the Eagle Scout rank, and saw the challenge as an opportunity to better UA. Ross decided to map out trails and place signs behind the school for his project.


In addition to achieving Eagle Scout, the Daughters of the American Revolution (DAR) awarded Ross the DAR Good Citizen award, which is given to one student per school each year. He also received UA's Excellence in Math award and maintained A Honor Roll throughout his senior year.


This fall, Ross will take his talents to UNC Asheville to study meteorology.


“I feel that I am well prepared to move on into the next phase in my life, and I am excited for it to come,” he said.


Ross attributes his successes to his constant perseverance, and he encouraged rising seniors to never give up on their dreams.


“Always try your best at everything, no matter how daunting the goal is,” Ross said. “As long as you put your best effort in, the success will be a byproduct of that.”


Thank you, Taylor, for sharing your talents with Union Academy. We wish you the best of luck in your future endeavors!