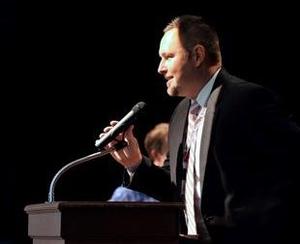 Paul Williams has record of success in several principal roles.

His most-recent principal role was at McClintock Middle School in CMS from 2012-16, a Title I school with more than 1,000 students and 60 staff members. While at McClintock, Williams opened a new school building, led the transition from a traditional middle school to a STEAM (science, technology, engineering, arts and math) magnet school and facilitated a successful partnership with Christ Lutheran Church that increased volunteer and parent involvement.

His focus on academics included bringing the Teach to One math program to McClintock, the only school in North Carolina to use the model. Teach to One uses technology and personalized/flexible student groupings to improve achievement. He also created new courses for the STEAM program, including programs with NASCAR 1080 and in robotics and engineering. McClintock met expected growth from 2013-15, meaning students achieved at least one years’ worth of learning in one years’ time. It also went up one full letter grade on the North Carolina School Report Card, due to improved achievement in reading, math and science.

In 2016, Williams chose to return to the classroom. He’s been teaching fourth grade at Indian Trail Elementary, leading the team to reduce suspensions and improve school-wide behavior and leading professional development sessions on effective grading practices.

Prior to working at McClintock Middle, Williams was principal of Winget Park Elementary in Charlotte from 2009-12, a school with nearly 1,000 students and 70 staff members. While he was at Winget Park, the school achieved high growth and was recognized as a School of Distinction. He worked to secure grants and partnerships, raising more than $100,000 for SMART boards and iPads.

Williams focused on building a community at Winget Park, establishing strong Professional Learning Communities among staff and receiving satisfaction and safety ratings over 90 percent from parent, teacher and student surveys. In addition, he recruited, hired and retained more than 90 percent of his staff each year, fostering consistency in teachers and staff.

Williams was also an assistant principal at Dilworth Elementary Visual and Performing Arts Magnet and Ashley Park Elementary schools from 2006-09. While there, he focused on improving academic achievement, analyzing test data and working with teachers to create research-based plans to help students. Williams also monitored instruction and student learning, evaluated the teaching staff and provided consistent and constructive feedback to staff members.

Williams started his career in 1999 in Guilford County Schools, working as a kindergarten teacher, third-grade teacher and fourth-grade teacher before moving to Charlotte-Mecklenburg Schools to work as a fifth-grade teacher in 2002.

During Williams’ career, he’s been named one of the Charlotte Observer’s “7 to Watch” for 2013 for innovation in education, was the Central Learning Community Principal of the Year in 2013-14 and was named CMS Principal of the Month for September 2015.

Williams has a master’s degree in School Administration from UNC-Charlotte and a Bachelor of Arts in Elementary Education from Greensboro College. He lives in Indian Trail with his wife and two children.