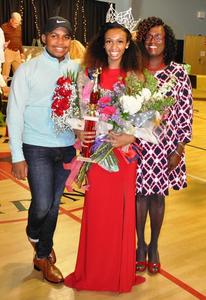 
Ms. Little was involved in a number of extracurricular activities her senior year all while maintaining A-B Honor Roll. She was a captain of the varsity cheerleading squad, a leader of Girl Talk Club, a member of both National Honor Society and Senior Beta Club and a peer tutor.


Little also participated in many community service projects like Toys for Tots and the Back-To-School Drive with Faith Based Center of Hope this year and doubled the 105 required community service hours needed to walk at graduation.


Her exceptional work ethic and overall positivity haven’t gone unnoticed by the Union Academy family. This year, Little was nominated for both the Ron Brown Cornerstone Award and the Ken Templeton Headmaster’s Award, which recognize exceptional seniors who exemplify all of Union Academy’s character traits. She was also crowned 2017-18 Miss Union Academy and received the Best All Around award for the 2017-18 cheerleading season.


While Little accomplished so much during her time at Union Academy, her successes are just beginning. She will attend Wake Forest University next year and plans to study psychology and Spanish. She recently made the university’s cheer team and will begin her cheer career as a Wake Forest Deacon this fall.


When asked how she felt about graduating high school and starting a new chapter in her life, Little said she’s extremely excited.


“It’s a bittersweet moment because over the years, I always admired those graduating, and here I am, graduating in a few days” she said. “I’m ready to see what the future has in store for me!”


She also had a little advice for Union Academy’s rising senior class.


“Have fun!” she said. “Embrace it all, because it will definitely go by quicker than you’ll expect, especially once you’re done applying to colleges. Appreciate your teachers and all they’ve done to help you get to where you are. Spend as much time with your parents as you can, because you’ll miss them when you’re gone!”


Thanks, Asya, for the wonderful example you set for our students. You will be greatly missed around campus!