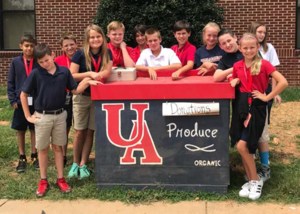 UA families may have noticed the produce stand in front of the main Upper Campus building. Sixth-grade students are in charge of the stand, which includes maintaining the school garden, harvesting the produce and managing the donations.

Craving fresh vegetables? UA students are developing their green thumbs – while making a little “green” for the school, too.

UA families may have noticed the produce stand in front of the main Upper Campus building.

Sixth-grade students are in charge of the stand, which includes maintaining the school garden,

“It’s really cool to go outside and not be in the classroom all day,” said sixth-grader Mac

Thorstenson. “Going outside to learn what the real world is about is better. It’s fun because you’re learning as you go.”

cucumbers and zucchini, and when to pick them.”

Beth Rushing is the school’s experiential learning coach. “Instead of just reading about farming, gardens and pollination, how flowers turn into vegetables, our students get to see it in action. It ties together the lessons they learn in the classroom to things they see in their world.”

“We actually saw bees pollinating the flowers,” Mac said. “You see videos and pictures about it, but then we saw it happening.”

The UA garden is a hands-on project. At the end of the last school year, students made tomato rings to support the plants. But it took more than just heading to the closest home-improvement store.

“They had to measure out the diameter, figure out how much space we had, and determine the amount of materials needed,” Rushing explained. “They had to use their math skills and do research to make it happen.”

“He had a project to learn to use something he hadn’t used before, and he chose a table saw,” Rushing said.

He built the produce stand and they used it at home for years. When the family didn’t need it any longer, Rushing brought it to UA, where it was freshened up and painted in UA’s red and blue. It sat in storage for a couple of years, until Rushing decided to find it and put it back in business.

“We finally found the stand in storage, but we didn’t know what condition it was in,” said sixth-grader Mason Ford.

“The next day, we pulled it out, but one of the legs was broken,” continued sixth-grade student

That didn’t stop these kids. They worked out how to fix the stand – measuring the length and

width of a new piece of wood, figuring out the measurements, then working with the UA maintenance staff to cut the wood to the correct size.

With the stand back in business, the students focused on finding fruits and vegetables to fill it.

While the experiential learning students work on the garden, Rushing said sixth-grader Cody Boyce has taken it on as a personal project.

“He loves gardening and really works hard to manage it and maintain it.”

When students, staff and visitors come to UA and see the produce stand, they can know it’s

filled with more than cucumbers and tomatoes. It’s also filled with lessons in math, reading, science and more.