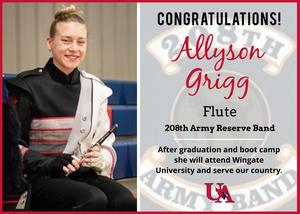 By Katie Tohill - 10th grade
“I’ve worked so hard and am so blessed to have this opportunity!” said Allyson Grigg, a senior, who plans to join the United States Army Reserve Band. She was first intrigued by the possibility of being in the US Army Reserve Band after her private flute teacher, a former member of the US Army National Guard Band, encouraged her to give it a shot.
Throughout the audition process, Allyson prepared and performed three pieces, beating out many other eligible flute players for her position in the US Army Reserve Band. “Thank you to everyone who has helped me along my journey,” she said.
This summer, Allyson will go through 10 weeks of basic training camp and work full-time for the United States Army Reserve Band. During the school year, she will attend Wingate University where she will pursue music and earn a degree. In the summer of 2022, Allyson plans to partake in a music training camp and then transition to working part time (one weekend every month) for the US Army Reserve Band.
Army bands typically travel to perform at different bases across the country for events like graduation ceremonies. There are bands representing each branch of the military, but the Army Band is by far the largest.
For more information and specifics regarding the United States Army Reserve Band, visit https://www.bands.army.mil/.