Coach Love’s Name Speaks for Itself 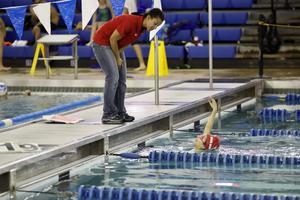 Coach Jennifer Love is finishing her 11th year as the varsity swim coach. This year she has 12 swimmers who qualified for the NCHSAA state meet.

Monroe, NC - February 6, 2020 - Union Academy’s swim team started with humble beginnings in 2008-09 with just two swimmers representing the Cardinals. Bethany Faulkner (2012) and Andrew Lloyd (2011) practiced with the Sun Valley team and competed in individual events for UA. Faulkner explained, “Sun Valley graciously took us under their wing for that first year for practices, meets, and coaching, but we always swam under the UA name.” The two swimmers were appreciative, but they had dreams of being part of a team at Union Academy before they graduated.


Lloyd heard PE teacher Jennifer Love had been on the swim team at Wingate University, so he approached her about helping start a UA team. Love, who was in her second year as a PE teacher at UA, agreed, and 11 years later Love is still standing on deck coaching her swimmers. “I talked with our AD at the time, and she gave me the go ahead even though she didn’t know much about it,” stated Love.


In their first official season (2009-10) UA’s team consisted of 12 swimmers. Team wins were not possible with such low numbers, but individually the swimmers performed well. Over the years, the teams have grown - mostly due to Coach Love’s warm personality and inclusive spirit. Teacher and former swim parent Cissy Brewer stated: “If a student has an interest in swimming, Jennifer welcomes them with open arms. She doesn’t care about their ability or disability, instead she includes them as part of her team and family.”


Because of Love’s all-inclusive nature, teams over the last 11 years have consisted of seasoned swimmers as well as those who simply wanted to be part of a team. “Coach Love was incredible from the start. Our team was always about 25-30% first time competitive swimmers. She pushed all of us out of our comfort zones, whether that was a 500 free when we could barely swim a 100 or the grueling 100 butterfly for the first time,” stated Faulkner. Whatever the athlete’s experience, Coach Love welcomed them and coached them up. By the end of the season, many were placing at events and all had improved significantly. “Our team grew to over 40 swimmers by my senior year, and that was largely because of the commitment and heart of Coach Love. 11 years later, through all the change UA has seen, I am so proud to see Coach Love still leading our swimmers," stated Faulkner.


11 years is a long time to coach not one but two teams (men’s and women’s); then four years ago, Love added a middle school team. Shuffling practice schedules, meets, and three children of her own, begs the question “why” she continues to coach. “I love watching my swimmers build endurance and show consistent improvement. Those things lead to kids building confidence. Swimming allows everyone to be a part of the team,” explained Love. “This sport allows kids from all backgrounds and personalities to become a family on deck.” Love also credits Becca Yanacsek and Julie Matthews for their help coaching over the years. Without their help and the help of the swim parents, the teams would not have been so successful.


In just a few short years, Love was producing conference championship teams. The men’s teams won Yadkin Valley Conference championships n 2013-14, 2014-15, and 2015-16. Olin Austin, a member on two of the those teams, stated, “Coach Love is not only an amazing coach but a mentor to everyone. I greatly enjoyed my time on the team.”


None of this would have happened without Coach Love’s background in collegiate swimming. Love was part of the Wingate University team for three years between 1997-2001 where she swam the 100 breaststroke, 200 butterfly, 100 free, and free relays. She attributes much of the success of her teams to one of her college coaches. “I owe a lot of what I know about swimming and coaching to Kirk Sanocki at Wingate University. He came to Wingate my senior year and made a huge impact on me both personally and as a swimmer.”


The impact of Coach Sanocki continues through Love as her swimmers sign scholarships to continue in college. Kelsi Hill (2019) signed a NLI with Division I Eastern Michigan last spring and is already making an impact on the team. “She teaches and coaches with a passion in order to portray a positive role model to her student athletes. I know Coach Love will continue to show and emphasize the importance of being a UA student,” said Hill. Several other swimmers have gone on to swim in college and a current senior has committed to a Division I school.


“Positive, mentor, amazing, inspiring, fantastic, caring” are just a few of the words her former swimmers used to describe her. Lloyd, the swimmer who asked her to coach 11 years ago jumped at the chance to share his feelings about his former coach: “I remember how excited and genuinely engaged Coach Love was when she started our swim program. You could tell that she was all in. She was all in to love, serve and position us swimmers to be the best student athletes we could be. She pushed family, education and team before anything else. She empowered her kids to lead, critically think and give their best. There is no question that she was the right person for the job. UA gained a gem with her as the swim coach and her last name speaks for itself.”


This year’s team boasted 15 on the men’s team and 24 on the women’s with 12 swimmers qualifying for the NCHSAA 1A state meet. Grayson Brun, a member of the middle school team stated, “Coach Love taught me to always do my best and never back down from a challenge.


And that, Cardinal fans, is the UA Way.