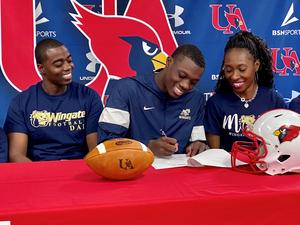 According to Coach Justin Frashier, “Derek is one of the best all-around athletes I’ve ever coached. He is the type of athlete, individual, and leader that a coach gets once in a lifetime. I think he will make an immediate impact at Wingate, and I look forward to watching him continue to develop.”

Derek has made an impact not only on the football field where he played both receiver and defensive end, but also on the basketball court averaging 16 points a game and 8.8 rebounds. In 2018, Derek won the 1A Men's Triple Jump State Championship.

Derek said, “I felt at home immediately at Wingate because the coaches treated me like family and the campus is welcoming. I think I have a good chance to see playing time next year. Attending Wingate means my family will be close by and can watch my games. I have three little brothers, so being able to see them continue to play is important, too.”