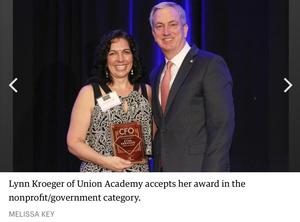 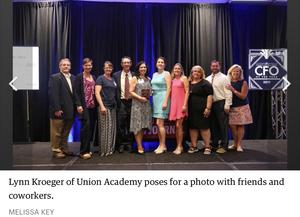 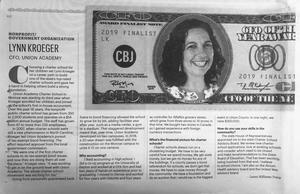 Monroe, NC - July 18, 2019 - Lynn Kroeger, of Union Academy, was named the Nonprofit/Government Organization CFO of the Year from the Charlotte Business Journal.


After graduating from the University of Dayton and becoming a CPA, Kroeger began her career in public accounting at the prestigious Deloitte. Since joining Union Academy in 2003, Kroeger has been instrumental in developing the school’s financial infrastructure from its beginning stages into an award-winning department. Kroeger serves dual roles as the Human Resources Director and the Chief Financial Officer. During Kroeger’s tenure, Union Academy’s enrollment grew from 350 to almost 2000 students. At the same time, Union Academy’s staff grew from 67 to more than 350. Under Kroeger’s leadership and efforts to create an excellent workplace environment, the school was named a 2016 and 2018 Top Workplace by the Charlotte Observer.


Recently, the UA Business Office was awarded the Certificate of Excellence in Financial Reporting from both the Government Finance Officers Association (GFOA) and the Association of School Business Officials (ASBO). UA is the only charter school in NC to ever receive either of these awards. This was the ninth year the department received the GFOA and the tenth year for the ASBO.


Kroeger was appointed by the NC House of Representatives to serve on the NC Charter School Advisory Board and is currently in her third year of service.