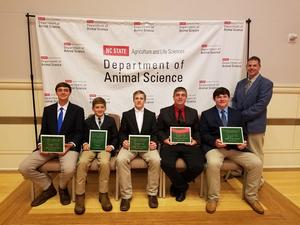 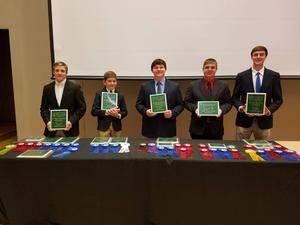 On Thursday, July 25, 2019, the UA 4-H Livestock Skillathon and Quiz Bowl Teams competed at the State 4-H Livestock Skillathon and Quiz Bowl Competition held in Raleigh, NC. Union Academy fielded one senior team comprised of four high school students and one middle school student who competed in the junior division. The Senior Team was comprised of Trey Howey, Kaleb Pope, Cade Stegall and Isaac Williams. Clint Mills competed in the Junior Division as an individual competitor. The Senior Team went against the top 20 teams in the state and came out victorious, winning UA’s first State Championship in Agriculture.  UA was recognized as the High Scoring Sr. Team Overall, placing 1st in the Identification Category, 2nd in Quality Assurance, and 2nd in Evaluation. In addition, UA was recognized as the Reserve Champion Overall Quiz Bowl Team at the State Contest.  Based on their performance and overall ranking, the UA team will represent North Carolina at both the National Skillathon and National Quiz Bowl competitions this fall. The team will be traveling to both Harrisburg, Pennsylvania and Grand Island, Nebraska.

Members of the team had to identify and classify livestock feeds, equipment, breeds and meats. In addition, each student had to complete a Quality Assurance problem, judge classes of hay and wool, and correctly evaluate a class of New York Strip steaks.  Finally, the team had to work collectively to complete a series of team problems related to Agricultural Economics, Quality Assurance, Breeding Scenarios and Product Administration.

This was the first time Union Academy has participated in the State 4-H Livestock Skillathon and Quiz Bowl Competitions. The students worked hard all year to prepare for this competition. They represented the values of Union Academy. They are coached by Michael Alexander who is also the school’s agriculture teacher.