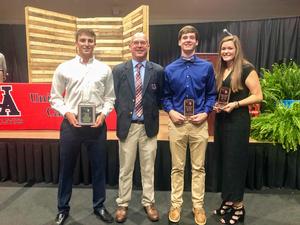 Three senior athletes received UA's top athletic honors at the 2018-19 all sports high school banquet May 20: Emma Munday, Hayden Gosnell, and Dylan Brooks.
Emma Munday, a four sport athlete, earned Female Scholar Athlete of the Year as well as Female Athlete of the Year. Munday has kept a high GPA for all four years while playing multiple sports. She is a standout volleyball and basketball player and in her first year on the track team qualified to compete at states in discus and shot put. Munday has signed with Columbia International University to play volleyball.
Hayden Gosnell was named the Male Athlete of the Year. Gosnell played football, basketball, and baseball. As a quarterback, he broke all previous records for passing and has signed to play football at Wingate University.
Dylan Brooks was awarded Male Scholar Athlete of the Year. Brooks is also a three sport athlete: football, swimming, and baseball.
Scholar Athletes are recognized for their outstanding work in the classroom and on the field. Athlete of the Year is voted on by the high school coaching staff, and athletes must play more than one varsity sport.